The Italo-Disco King Of Freeware

Horseradish Gluckenspiel / Beyond The Sunset / Men With Horses Project is ran by Kaale Warkata, commonly known as Infernal. Making games since 2013 (and posting them online since 2016), and a plethora of other things. Inspired by freeware games of 2000s, many great game designers, artists and musicians - major ones being Kraisoft, Shawn Noel, ShayeSaintJohn, Kimberly Kubus, Jake Clover, Vasily Zotov, Wade Gielzecki, SMERSH, Napoleon XIV, Juan Rogelio Camilion, Petr Mamonov and many other. I specialize primarily in making games and midi music, and additionally drawnings, videos and other stuff here and there, whatever I feel like doing I just do. Several movie scripts are being written but without plans on filming in the closest future. The website itself is in a kind of a frozen state at the moment.

I have created a universe that as of now is called "The Realm". It exists outside of the beyond and encompasses 6-7 dimensions/planes/worlds within it. A section of the site was supposed to be dedicated to this but as of now the whole thing is still raw and not very sorted out. Many of the games take place within the said universe, specifically the hand drawn ones and rum series, but many others too. You might find some of the monsters and freaks from this world in my gallery (Lassaracuferus II, III A Helvetian, Another one and so forth). But I will not disclose much on here as I'd like to keep this page short and instead lay out the entirety of this on the dedicated section, which, alas, may or may not come to fruition.

I have gained the title of "The Italo-Disco King Of Freeware" posthumously (my real self has been destroyed in 2018) due to my involvement with the sphere of freeware, the love for Italo-Disco, and due to the successful attempts to combine both. You are, as of now, yet to see the "Italo-Disco Trilogy" as it didn't yet make it. I like other genres too though. Horseradish-Gluckenspiel (sometimes expanded with Dementia Questionnaire Manual or other drivel) and Beyond the Sunset are two polar opposites, one invokes all things bizarre, the other - infinite tranquility. The goal is to reach the latter by dwelling in the former. Men With Horses for now will remain shrouded in mystery. 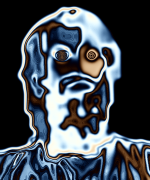 Kaale in 2018
Over the years I have morphed into some kind of bastard who can't get satisfied, motivated, or really enjoy doing anything at all. I continue this site mostly out of spite for all the time lost on the Invisible Wars (constant name (15+ times, this meant I had to change it in every single game, every fucking time) / design changing (~13+ up to the release of the last game, about a dozen or so more past that) and as a result of those 2, collateral link changes (~9)) and because I want to keep all my stuff available for download. I do hope for some divine intervention to launch me back in time so I can prevent everything mentioned in this paragraph from happening. But I'm not giving up - and this website is the proof of that.

If you feel the need to contact me, post on my neocities page. I will find a better way for this soon though.

"The Sun Will Shine, The World Is Mine"